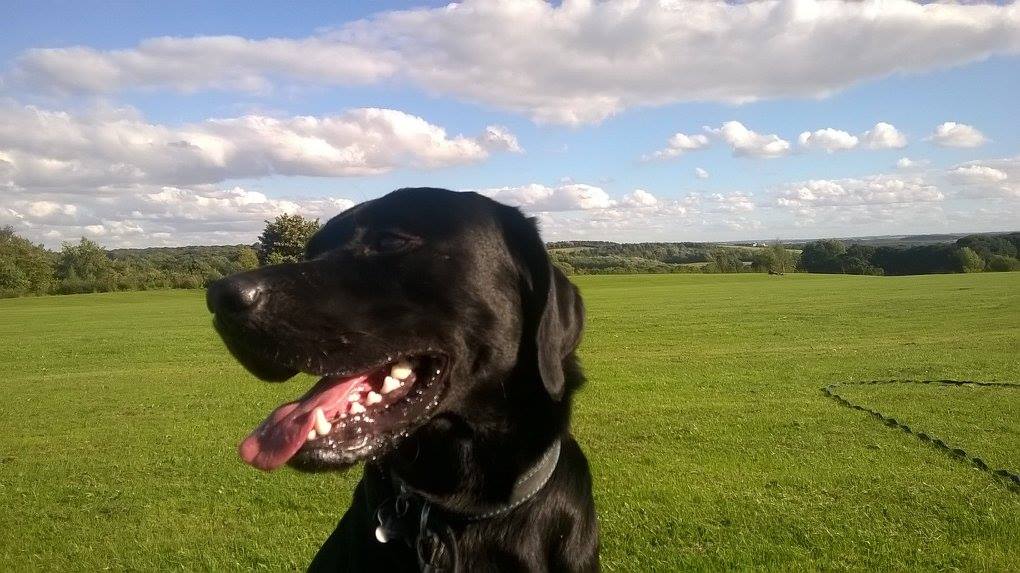 Today’s blog occurred to me whilst George was having his quick lunchtime loo break. Usually the streets around me are very quiet and dog free at lunchtimes, and with George being occasionally grumpy towards other dogs, its a perfect time for a relaxed walk. Today not so much though!

Now George has come a long way in the last year or so (after being attacked several times by the same dog over a summer), and is far more tolerant towards dogs being on the opposite side of the street than he ever has been before. I’m not gonna lie, it’s been a tough old ride to get him where he is now. And I really want it to stay that way!

On today’s walk, we encountered several things that could have triggered his grumpiness, and thankfully all was avoided.

George is not a fan of cats and will lunge at them if they are too close.

Only two minutes into our walk, George stopped to sniff a bush, I went on a short distance before stopping and managed to spy a cat sat in a driveway only 3 feet away from George’s nose!

If you have a grumpy dog, your first thought is just dread, and the whole walk can spiral into chaos. So in this case we have two options:

Happy days! We managed to walk on by without causing any stress to me, my dog, or the cat! Not only that, but George practised walking on by without reacting, and reinforcing the behaviour in the future.

A flood of dogs

Okay, maybe I’m being a little dramatic on this one. It was only 3 dogs that appeared out of nowhere. But for a nervous dog, that can be very, very overwhelming!

Being surrounded by unknown dogs can be scary and stressful for some dogs, as well as the owners. It’s especially important for you to be your dogs hero and take charge of this environment.

The key is to know the distance at which your dog is triggered and add a few metres. If your normally foodie dog is not taking food then you are really at the wrong end of the comfort zone.

Request space if there is nowhere to go, or use visual blockers (like cars or bushes) to avoid a reaction from your dog.

This is probably one of the worst types of dog walkers…. They are well meaning but so persistent, to the point that they are often quiet inconsiderate of others. You know the ones that just want force their dog on every dog they see and won’t take no for an answer.

I’m not sure who finds this more stressful, me or George… Even when I am walking Rio, I want his focus on me and not to be pulling to meet other dogs.

Not only that, but dogs meeting on leash are far too restricted, often they cannot express appropriate body language, and become frustrated, triggering a reaction.

Today I had to cross the street several times before getting the message across to the owner that my dog did not want to meet his dog! And yes, it is a little stalkerish….

Be aware of any exits that you can move towards to dodge the other dogs. Unfortunately, far too often, other owners see someone with a dog and decide to move towards them for the dogs to greet each other. This is where you need to be a hero and request space for your dog! Be polite but firm. Even we as humans, don’t wish to meet everyone we cross in the streets!

Flexi lead dogs seem to just appear out of nowhere and make me very nervous, I can just smell disaster waiting to happen.

I avoided the flexi lead dog like the plague today even though he was on the opposite side of the road. Mostly because I knew that if that dog reacted to George, it would trigger a reaction from George, and the leash was so extended that the dog could run into the road and get injured or reach George, or the lead could fly out of the teenagers hand and he would lose control of the dog.

Out of all of the situations, this one is the most worrying just because of the lack of control people have with a flexi lead and how easily they are pulled out of the hand.

In this situation it is best to do everything possible to avoid a reaction with the other dog. I managed to spot the dog from about 20 metres away and quickly changed course down a side street until the dog had safely passed. Sometimes being a hero is just about predicting situations and avoiding at all costs.

Are you your dog’s hero?

Dogs can’t tell us what they want, so we have to take control for them. The most important thing is that George is not reacting. And while he is not reacting he, is learning how to walk by and deal with these situations the right way.

All of the instances that I encountered today could have sent George into meltdown and set us back months. But with careful management and assertiveness towards other owners we actually had a rather enjoyable walk!

Do you have a grumpy dog? Tell us about them in the comments 😀